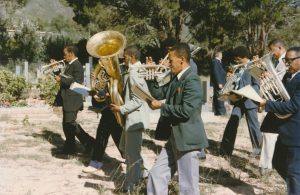 The Brass band leading a service.

In Genadendal, during Easter, everyone heads for the cemetery. They carry flowers and buckets filled with water. The graves of ancestors are cleaned, the weeds are all pulled out, stones that have fallen are re-arranged and an earnest attempt is made to restore them, to hold off nature till the next year. A service is held the next day where the community gathers. There are amazing links between time and space, almost 300 years ago a community would have gathered in the kraal and go out dancing in the moonlight. Georg Schmidt came with a Bible, at a time where the Khoi community faced destruction because of the settlers, increasingly forcing them off the land where they grazed their cattle, in order to work it as labourers.

Genadendal is a microcosm of a broader change in South Africa in that it reflects the impact of colonialism that started from colonial occupation and culminated in the apartheid regime (Bredekamp, 1997; Davenport & Saunders, 2000). The Bible in terms of this study takes on the human quality of solidarity because the individual biography of the Bible plays a lesser role, to the quality of solidarity it has with other Bibles e.g. Mother Lena’s Bible held in the museum in Genadendal. As humans, we attribute human qualities to objects, we give them names or we are afraid of them (Gosden & Marshall, 1999). It can be argued that we can take this line of reasoning further and explain how objects which have certain histories can be linked to one another. These linkages exist because they form part of a broader narrative. It reveals the power that a seemingly inert stack of pages bound with wood and leather holds, a power that would otherwise be unknown if we just looked at the Bible without trying to understand its context or what meanings can be derived from it.

The Bible, the object of our focus, plays a big part in shaping the narrative. It reflects the idea that an object can play a distinct role in shaping its surroundings and vice-versa (Gosden & Marshall, 1999). With the hope that this study will reach out to someone who does know its story, it reflects a history of the meeting of peoples and the empowerment of them through this interaction. Yet it is important not to be naïve; to realise that it came at a cost for the Khoi who had lost their land and cattle and who now were increasingly forced to become farm labourers and to work the land they had previously grazed their cattle and sheep on (Bredekamp, 1997; Elbourne, 1992; Nissen, 1990). Thus it is appropriate to end this essay with a final story of Daniel Moses Wessels. One Sunday, after leading a service at the Lansdowne Moravian church, he asked my grandfather, Martin Wessels, to break a branch off the tree for him. He was speaking at an Anti-CAD event at the Grand Parade in Cape Town and he took the branch with him. When he was on stage and had begun his speech he said: “I too have a special branch.” He was poking fun at the Special Branch police who attended these gatherings to collect information and investigate anti-apartheid activists. 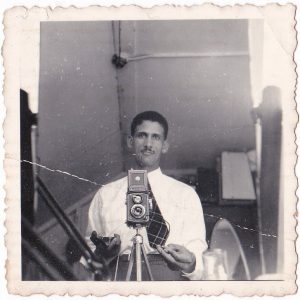 The photographs taken of Genadendal were taken by my grandfather Reverend Martin Wessels. He and my grandmother had a passion for photography and this is shown in the abundance of photos they have left us.