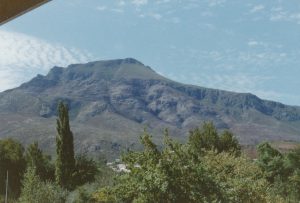 The mountain towers over the village.

This project aims to use my chosen object, a New Testament Bible published in 1729 (in Dutch) to open up a discussion about the relationships between the Khoi, the missionaries, the Dutch East India Company (VOC), and the farmers during the period of 1737 – 1806 in the Overberg area. In particular, in this project I seek to better understand the reasons the Khoi community in this area voluntarily converted to Christianity, and all but abandoned their own belief structures and way of life. The story of this Bible revolves around the arrival of Georg Schmidt, a German Moravian missionary, who came to bring the Word of God to the Khoi in the Overberg in 1737. When Schmidt arrived after travelling by wagon from the Cape to the VOC cattle post at Soetmelksvlei he was welcomed at a nearby kraal (Bredekamp, 1997). Fortunately for Schmidt, the wagoner during his journey was a Khoi man named Africo (Schmidt, 1981; Bredekamp, 1997). Africo was the clan leader of a Khoi kraal, and he would serve as Schmidt’s interpreter in the Overberg.

The Khoi had herds of cattle, and the VOC needed cattle. The outposts served as a meeting place for a commercial relationship between the VOC and the Khoi (Krüger, 1966). Schmidt found a community in transition, a result of contact between the Khoi and the Dutch settlers (Davenport & Saunders, 2000). The Khoi in the Overberg were assimilating to a Cape Dutch way of life (Bredekamp, 1997; Krüger, 1966). His purpose for coming to the Cape was to bring Christianity to the Khoi and to ensure the spread of Christianity around the world, a form of Christianity that sought to include people rather than exclude. With his arrival and subsequent teachings, what transpired was a different form of Christianity than that which existed at the Cape previously.

The VOC and the settlers were Christian but were not interested in Christianising the Khoi, and opposed the Khoi becoming members of Christianity as this would mean that the Khoi would be seen as equals before God (Elphick, 2007; Marsveld, et al., 1999). These oppositions to the Khoi becoming Christian were something that the missionaries were keenly aware of, and of which they spoke in their diaries (Schmidt, 1981; Marsveld, et al., 1999). In 1744, when Schmidt was forced to leave the colony, he was scolded by a clergyman of the Dutch Reformed Church for even attempting to bring Christianity to the Khoi (Schmidt, 1981; Krüger, 1966). This process of denying the Khoi equality under God formed part of a broader effort to encroach on Khoi land and cattle stocks, reflecting a systematic oppression towards the Khoi by the VOC.

The missionaries taught some of the Khoi how to read Dutch out of pragmatism (the missionaries themselves spoke German) and would give them a New Testament Bible as a gift when they became proficient in the language. Although the Khoi gained agency through religious education in a time where they were facing despair and discrimination, they also lost their previous way of life. The Bible, then, symbolises the beginning of the Genadendal community as it exists today, but it also symbolises the end of another – in this case, the Khoi way of life. How do we reconcile this transition? It is in the end impossible not to see Christianity arriving at the Cape as a part of the colonialism that led to the disintegration of the Khoi (Davenport & Saunders, 2000; Nissen, 1990; Elbourne, 1992). Yet Christianity came to mean something different during apartheid, where religious leaders became activists against it, believing that their faith and morality would not allow them to be silent in the midst of racial oppression (Davenport & Saunders, 2000).

I want to reflect on the lived experiences of those who came before me and what it meant to be discriminated against during apartheid. Specifically, I want to focus on the life of my great-grandfather Daniel Moses Wessels, who was a priest and anti-apartheid activist. The values for which he fought were that of non-racialism and equality, and he warned against the long-lasting effects that apartheid would have on South African society. My reflection on these questions is grounded in an exploration of a Bible, still in possession of my family.

An object has many uses; it can have a specific utility or it can be purely aesthetic and normally these functions are intertwined (Gosden & Marshall, 1999). What does an object like a Bible hold in time and space? We know the purported purpose of the Bible for the faithful is that it represents a vehicle which brings God’s Word to us on earth (Gosden & Marshall, 1999). In other words a Bible carries with it intrinsic meanings that we as a group of people have come to understand (Gosden & Marshall, 1999; Schaefer, 2015). Interestingly though, there is the idea that an object can acquire a biography, similar to that of a person (Gosden & Marshall, 1999). The focus of our attention is the New Testament Bible, it becomes a foundation onto which we can build a story that explores the changing Khoi society in the Overberg i.e. the introduction of Christianity. I also contribute a personal story, that of my great-grandfather, a man who I never met or knew but whose story continues whenever I learn more about him. In many senses, the complexities and nuances of the development of Genadendal, with the Christian expansion and the demise of the Khoi way of life, are exemplified in his story.

The Bible and the workshop 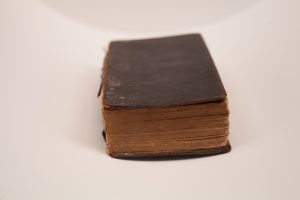 Somewhere in a workshop, in a street in Amsterdam, all the ingredients that would make up this Bible are each put in their correct place: the printing press asserting its authority in the middle of the room, it is the first thing we see as we enter (Gosden & Marshall, 1999; Brown, 2001). The blank paper lined up in the press, then stacked, now transformed, and printed (Gosden & Marshall, 1999; Brown, 2001). The wood covers are wrapped in leather, and the final step is to assemble it all. It makes me wonder if the makers of the Bible would have any idea of where this Bible would end up and the meaning it would later take on. From the hands of the makers, it may have moved to a bookshop, arriving in the hands of the bookshop owner. Missionaries arrived in Amsterdam from Herrnhut, Saxony (the base of the Moravian church) ready to board a ship (Krüger, 1966), did they purchase a group of Bibles before they left or only once they arrived in the Cape? I guess that we can imagine that perhaps it arrived in box with other things stuffed into a ship headed for the Cape, or it was clutched by the person holding it, reading it, and finding solace amongst its words. From there it would have arrived in the hands of a believer – the enduring feature of a Bible is all the many hands that have held it, and passed it on. At some point, its movement stops and it rests in a box in Genadendal, its circulation between generations slowed and made still.