History of Genadendal and Surrounds 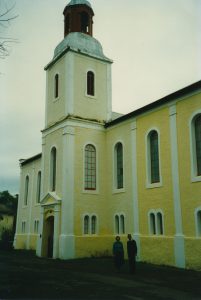 The Genadendal Church built in 1891.

In our minds, when we think of a village, our imagination calls forth the buildings, the mountains, the roads and so on. I feel this is perhaps because it reflects a need to have something concrete in our minds, to provide a setting for events. Timelines, as concerns historical time, provides more of a challenge to us because they require us to create a start and an end, as opposed to a single moment. I have chosen as the end of the historical narrative for this project the point at which Genadendal obtains its name, as that moment determines the site as we know it today. The timeline then will be viewed as such – from the kraal close to Soetmelksvlei to Genadendal obtaining its name.

The history of Genadendal begins not in the present village as we know it today, but instead we can trace its beginnings to a Khoi kraal close to a Dutch East India Company (VOC) cattle post called Soetmelksvlei (Bredekamp, 1997; de Boer & Temmers, 1987). It is the area roughly midway between present-day Genadendal and Riviersonderend (Bredekamp, 1997; de Boer & Temmers, 1987). When Georg Schmidt arrived in the area in 1737 he put up his tent in a kraal where Africo was the clan leader and possessed his hartebeesthouse or frontiersman house, which is an A-frame house, constructed of reed, mud and thatch (Bredekamp, 1997; Krüger, 1966; Martinson, n.d.). Schmidt began his mission amongst the Khoi there. In 1738 Schmidt, with eighteen followers, moved the mission community to Sergeants River (as Georg Schmidt calls it in his diaries) which would later become known as Baviaanskloof, the present-day Genadendal (Schmidt, 1981; Krüger, 1966).

At Baviaanskloof, Schmidt, with the help of those that had moved with him, began to build something of a small functioning community. By the 3rd of May 1739, Georg Schmidt’s hartebeesthouse was completed and he and his community began the process of making a garden within which to grow vegetables (Schmidt, 1981; Bredekamp, 1997). On the 17th of November 1739, he notes in his diary that he and the community made a threshing floor together for the wheat they harvested (Schmidt, 1981; Bredekamp, 1997).With these diary entries, a picture emerges of a little community that was beginning to become self-sufficient. The community consisted of Schmidt’s frontiersman house, the matjieshuise (mat-houses) of the community and a threshing floor that since the 5th of December 1739, now also had a wall and a fresh coat of paint. Added to this on the 30th of December 1739, Africo had begun work adding a clay wall to a matjieshuis (Schmidt, 1981; Bredekamp, 1997).

Two years since the missionary had arrived, and the little hamlet had grown and was now a functioning settlement that had clay huts, kraals that kept sheep, barns, and matjieshuise (Bredekamp, 1997). They had gardens for vegetables and crops which they could thresh on a threshing floor (Bredekamp, 1997; Schmidt, 1981). They did not have a mill yet, thus for milling they had to rely on a local farmer (Schmidt, 1981; Bredekamp, 1997). When Schmidt arrived in the Cape, there was a perception amongst the local clergy that his efforts to convert the Khoi community to Christianity would fail (Krüger, 1966; Schmidt, 1981). The difference between the perceptions of what Schmidt could achieve and the ground that he had indeed begun to make in converting the Khoi to Christianity alarmed the Calvinist Dutch Reformed Church which then started taking issue with the non-Calvinist Moravians (Krüger, 1966; Bredekamp, 1997).

A letter from Count Nikolas von Zinzendorf (who was a Moravian bishop) had arrived for Schmidt informing him of his ordination which meant that he would be able to baptise those in his community to Christianity (Bredekamp, 1997; Krüger, 1966). Schmidt quickly began to baptise those closest to him – Africo (Christian), Wilhelm (Josua), Kybbodo (Jonas), Vehettge (Magdalena), and Christina were among the first (Schmidt, 1981; Bredekamp, 1997). This elicited the ire of the clergy in the Cape as well as the farmers in the area (Bredekamp, 1997; Schmidt, 1981; Elbourne, 1992). By baptising his converts, he put them as equals with the settlers before God (Krüger, 1966; Bredekamp, 1997). Ostensibly they argued that he was not an ordained minister and therefore could not baptise, although he had received his letter from von Zinzendorf permitting him to do so (Krüger, 1966). Their issue with his ‘unofficial’ baptisms resulted in his leaving the Cape in 1744 and returning to Herrnhut, the place from which he had started his journey. A community, they were no longer. After Schmidt’s removal and departure in 1744, it would take another thirty-eight years until a mission was started again (Krüger, 1966).
Christian Kühnel, Daniel Schwinn and Henrik Marsveld, three Moravian missionaries from Saxony arrived at Baviaanskloof on the 24th of December 1792, where they were shown the ruins of the hamlet in which no one lived anymore (Krüger, 1966; Bredekamp, 1997). The missionaries found Mother (Magda) Lena, one of Schmidt’s first converts on a farm near Sergeants River (Krüger, 1966). She played a role in keeping the faith alive by reading from the New Testament Bible that had been given to her by Schmidt. These powerful meetings would take place under the pear tree that Schmidt had planted in Baviaanskloof (Krüger, 1966; Bredekamp, 1997; de Boer & Temmers, 1987).

After finding Mother Lena at Sergeants River, the missionaries held their first service under the same pear tree (Krüger, 1966). The three missionaries quickly settled in and built a house that would adequately suit their needs. Thus, Baviaanskloof as a settlement had begun again (Krüger, 1966; Bredekamp, 1997; de Boer & Temmers, 1987). Importantly though, they were not able to put up a church as they did not have the required permit from the VOC, and it did not seem that they would be granted one anytime soon.
During the first British occupation at the Cape (1795-1803) the missionaries were permitted to build more buildings (Krüger, 1966; de Boer & Temmers, 1987). The first building to be built was a place to worship, and the chapel was consecrated in 1796, but it soon became apparent that the chapel was too small for the congregation (Krüger, 1966). According to Krüger (1966, p.77): “The foundation was made of stone, the walls of clay, the roof of straw, the floor was smeared with cow-dung.” In March 1797 they built a forge, and soon one of the missionaries, Kühnel, who was a knife maker (cutler), began using the forge to make Hernnhut knives. These knives put Baviaanskloof on the map as a source of quality knives within the colony (Krüger, 1966). 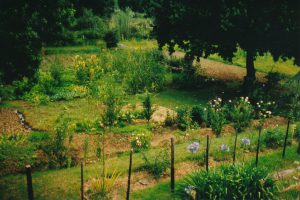 The tradition of keeping a garden is still kept, all these years after Georg Schmidt introduced it.

The hamlet that once was had begun to flourish again. Between 1796 and 1797 the Moravian community had built a chapel, a forge, and their mill – the mill being crucial because it meant that they no longer had to go to surrounding farms to use a mill (Krüger, 1966).

There were many similarities between the new settlement and the settlement of Schmidt’s time. In those years, gardens were keenly tended and used to provide food. There were many homes built of clay: “Every inhabitant had a vegetable garden adjoining his dwelling. The houses in the village were built of clay, some still in the shape of a bee-hive (matjieshuis) with an opening on the top for smoke, while others were square with a thatched roof. The interior was mostly unfurnished, with a kettle on the fire and hides for the night.” (Krüger, 1966, p. 80). This description as provided by the historian Krüger (1966) evokes images that one could experience today. If one were to walk down a street in Genadendal on a winter’s day a strong smell of smoke lingers in the air. 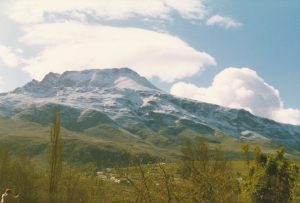 Mother Lena had passed away only five days before the new church had been consecrated (Krüger, 1966). This signalled the passing of the last known connection with the original settlement that Schmidt alongside her and others had started (Krüger, 1966). And in 1806 in the midst of the second British occupation becoming permanent, Baviaanskloof was renamed Genadendal (Valley of Grace) by the missionaries (Krüger, 1966)